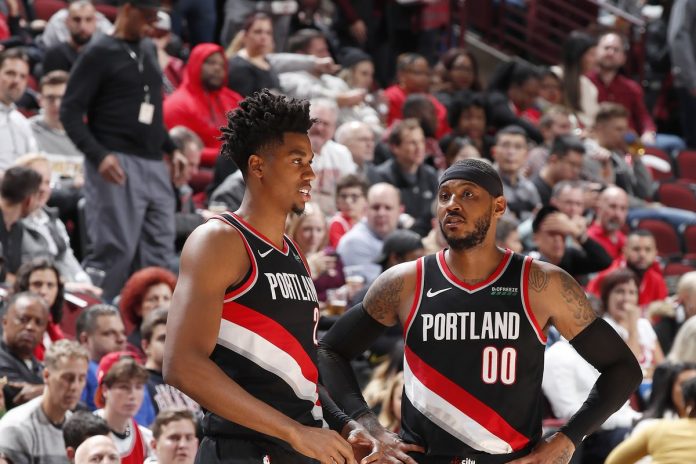 Run it back is a term we’ve heard describing the potential off-season plan of the Portland Trail Blazers. Fans who want this scenario are basically saying the roster from the previous season is good enough to compete if fully healthy. It’s fairly safe to use this model as the baseline for the bare minimum of what to expect moving forward. For the record, I’m not necessarily advocating this, but let’s see what the roster could possibly look like if they did go this route.

Ariza has a partially guaranteed contract next season. This means that if the Blazers keep him he will make $12.8 million, or if they waive him it’ll only cost $1.8 million to let him walk. No matter what decisions they make elsewhere, they have to pick up Ariza’s contract. At the very least it provides the Blazers with a decent contract to match salary in a trade. The best case scenario is if Ariza continues his 40% three point shooting and provides stellar defense like he did in the 21 games after Portland traded for him.

Here’s where things get a bit dicey. Since Portland decided to keep Whiteside instead of dealing him at the trade deadline, they are now stuck in a situation where they either re-sign him or lose an asset for nothing. Playing Whiteside alongside Jusuf Nurkić didn’t go very well in the bubble with the exception of a few spot minutes. If Hassan would commit fully to coming off the bench and being engaged when doing so, he could possibly be one of the best bench centers in the league. The problem is that you never know what you’re going to get from him from game to game.

Letting Whiteside and Ariza walk doesn’t lead to cap space either, so it’s almost like the Blazers are stuck giving him a contract or losing a little flexibility. The other note here is that if they signed Whiteside to a one-year deal he would then have veto power in any trades Portland tries to make with him. In this run it back model the play here would be to sign Hassan to a two-year deal and just hope he accepts his role off the bench taking a back seat to Nurk.

Melo has said he wants to be back in Portland. All indications are that Portland wants him back too. The Knicks are rumored to be interested in bringing Melo back to New York as well. If a bidding war for Melo’s services occurs, then Portland could get stuck in a situation where they are forced to give him part or possibly all of their mid-level exception just to retain his services. The ideal scenario is if Melo is re-signed for the minimum or as close to it as possible. There is also a question of whether or not Melo would accept a lesser role assuming the Blazers are fully healthy. For the run it back scenario, we’ll say that Melo signs a one-year deal to remain with the Blazers.

A throw-in to most in the Trevor Ariza trade, Wenyen was actually thrust into some key minutes in a few games after arriving in Portland. He’s an athletic big man who plays with a ton of energy and still has some potential to develop into a rotational player in the NBA. The Blazers should definitely try to secure him on a low contract and try to tap into some of his potential. At the very least Wenyen can be the 5th big at the back of the roster. Unlike with Melo, Portland has the rights to sign him without using their mid-level exception to do so. Without cap space retaining players like Wenyen who still have a chance to break out is a must.

A lot of people think it’s a waste to draft another prospect while Dame is in his prime. However, as you can see when putting the roster together this off-season, the Blazers should have a lot of depth, and aren’t in desperate need at any one position. That is a good place to be because they can simply take the best player with the most potential and not need to rush them into playing time. If that player is so good that they deserve immediate playing time, then that is a great problem to have and gives the Blazers some trade assets that they haven’t had in a while. If the drafted player is still a couple years away from contributing, I just don’t see that being a problem, since the path to playing time would be tough anyway. You might as well swing for the fences once again.

At the time of this article the NBA has not yet announced if they will be expanding rosters for this shortened season like they did in the bubble or what they will be doing with two-way contracts. If the rosters remain at 15 players like a normal season, then the Blazers simply don’t have a roster spot for their 2nd round pick if they are planning on re-signing Anthony, Whiteside, and Gabriel. I would try to move the pick for a future 2nd rounder. If two-way contracts are allowed this season then the Blazers could draft the best player available and sign them to a two-way similar to what the Denver Nuggets did with Bol Bol last season. They should also try to retain Jaylen Hoard on the other two-way contract. The Blazers could also decide to select an international prospect that isn’t ready for the NBA and stash them for a year or two until they are ready.

Move # 7: Use Either the Remaining Mid-Level Exception or Trade Exception

Even in the run it back scenario, I think we can all agree that it’s probably best to part ways with Caleb Swanigan this off-season. After using the 16th pick and re-signing the other three free agents the Blazers are left with one open roster spot (again under the assumption that rosters will stay at 15 players). Depending on how much Melo was signed for they’d have the remaining amount of their mid-level exception and they also have a trade exception for approximately $7.1 million that could be used to trade for someone making less than that amount. Here’s where Olshey can be creative even in this basic format. To keep things simple we’ll say that they just sign a free agent with the remaining money.

Here is what our roster depth ends up looking like after these 7 moves:

Obviously, if the rookie selected with our 16th pick is someone who’s ready to play and the MLE signing is someone who deserves a spot in the rotation, then that would alter how good this lineup would be. Regardless, if the Blazers do not have a roster at least as good as this then this off-season will have been a failure. The run it back scenario isn’t the most exciting option, but it is a pretty safe bet that a healthy Blazers team would make the playoffs with this rotation. Personally, I’m hoping for at least one solid move that makes the team even better than shown above. It will be interesting to see the plan for the Blazers unfold over the next few days.

The Ideal Off-Season for the Portland Trail Blazers

The Ideal Off-Season for the Portland Trail Blazers