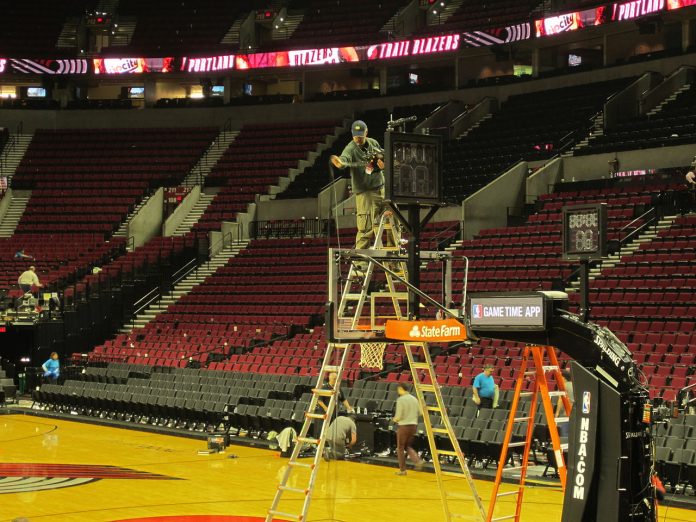 I am of the belief that the Portland Trail Blazers head into this off-season in a stronger position than summers prior. The big, four-year contracts given out in 2016 to Maurice Harkless, Meyers Leonard, Evan Turner, and Allen Crabbe are gone. With that comes the potential for the Portland Trail Blazers to use their full Mid-Level Exception, although the pandemic has made the cap situation a big question mark headed into the off-season. They also have a traded player exception of slightly over seven million dollars that they can use to acquire a player making under that amount without having to give up a single player to match salary.

With a wider range of tools to use in than off-seasons past, the Blazers also have seven extremely solid rotational pieces that are under team control going into next season. Those are Damian Lillard, C.J. McCollum, Jusuf Nurkic, Zach Collins, Gary Trent Jr, Trevor Ariza, and Rodney Hood (I think it’s a safe bet that he’ll pickup his player option). I am a believer in 9-man rotations, so that leaves two spots for Portland to fill this off-season. Portland could easily go into next season fielding a very competitive roster and the best bench they’ve had in years by filling those spots with some combination of free agents, Hassan Whiteside, and Carmelo Anthony. However, this article is going to outline my off-season dreams, while trying to maintain realism.

My favorite setup trade for this year’s off-season is to trade our first round pick for Nemanja Bjelica of the Sacramento Kings. Bjelica’s seven million dollar contract going into next year barely fits under our traded player exception, so we wouldn’t have to send anyone out to match his salary. Sacramento does have the opportunity to decline the option on Bjelica for next year, making him a free agent; however, that would make no sense since the Kings could get assets back for him. The Kings have a logjam of frontcourt players, so being able to flip Bjelica and a 2nd for a near lottery pick would be a solid move for them.

Portland, meanwhile, would be getting a 40% 3pt shooter who has some playmaking ability and is known for being a very smart and heady player. Bjelica would fit into the culture in Portland, and is the best player they could realistically get with the traded player exception. I love this move to setup the off-season for Portland because it fills a need in the rotation with a productive, veteran player without trading a player away and without using the Mid-Level Exception.

*Portland might have to include Nassir Little or Anfernee Simons in this trade package.

Milwaukee would’ve been the biggest disappointment in this year’s postseason if it weren’t for the Clippers collapsing and blowing a 3-1 series lead against the Denver Nuggets. A big issue they faced during the playoffs was the lack of a premier shot creator from the perimeter. They have soon to be back-to-back MVP Giannis Antetokounmpo, but as talented as he is, he struggled when tasked to take over the scoring load down the stretch for the Bucks. His sidekick in Khris Middleton is a great supportive piece, but also not a guy who is known to create his own shot on an elite level, and definitely isn’t the guy to take over playoff games. With that said, the Bucks might be interested in swapping Middleton out for C.J. McCollum, who would give them that versatile scoring guard who could take over playoff games down the stretch when needed. The main negative in swapping Middleton for McCollum is that it’s a major defensive downgrade, however the Bucks have the defensive personnel to account for McCollum’s shortcomings, and they should still be a top 5 defense in the NBA. Getting what could be a better fit in McCollum, as well as additional value in the way of picks and potentially a prospect, this trade makes sense for Milwaukee.

On Portland’s end, I’ve always said that the Blazers should NOT trade away C.J. McCollum… Unless they got a better player who was a better fit next to Damian Lillard. Khris Middleton checks both those boxes. The knock on the McCollum and Lillard pairing is that they’re not good enough or big enough defensively. Swapping out a poor defending, six-foot three McCollum for a good defending, six-foot seven Middleton would solve that issue immediately. The other knock is that McCollum and Lillard are two ball-dominant guards and redundant offensively. Whether you believe that to be an issue or not, it’s hard to argue that Middleton isn’t a better off-ball player than McCollum, as he shot 41.5% from the three-point line, and isn’t known as the ball-pounding isolation player that McCollum is. Middleton is more efficient from almost every area of the court, is a better overall passer, and would help Portland’s porous defense. I’d be ecstatic with this move, even if it meant giving up Little or Simons in the process.

Portland would still have one major rotation spot to fill, and I would love to bring Maurice Harkless back with the Mid-Level Exception. We know what Harkless brings. Versatile defense, flashes of energy, solid off-ball movement, spotty shooting, and an inconsistent motor. During his tenure here, Harkless was a player who some Blazer fans loved, while others hated. After his departure, the majority of fans lamented the absence of a “big defensive wing”, especially when the Blazers had to guard LeBron James with Carmelo Anthony.

So far this off-season, the Blazers added one of them in Khris Middleton, and have another in Trevor Ariza. Adding a third would give the Blazers the defensive personnel to throw at the Lakers and the Clippers in 2021. However, I love this addition even more for switchability purposes, which I’ll get to in a bit.

The Back-Up Point – Anfernee Simons OR a veteran free agent

The final move for Portland would be to determine who the backup PG would be. In previous years, that would’ve been C.J. McCollum; however, swapping him for Khris Middleton creates a hole at that position because Middleton isn’t well-suited for playing point guard. If Portland was able to keep Anfernee Simons, then I’d give him 12 minutes a game behind Damian Lillard, while also staggering Middleton so that he could play alongside Ant and take some pressure off of him. If the Blazers ended up having to trade Simons in order to get Middleton, then they could use whatever MLE they didn’t spend on Maurice Harkless, or their Bi-Annual Exception (apx $3.5M) on a backup PG from the free agent market. If you want potential targets, I released a video a couple months ago detailing some potential free agent targets that included some point guards. For this article, we’ll just assume that the Blazers still had Simons.

I love this lineup for a three main reasons. The first is that the starting lineup could be a top 5 defense if coached properly. There isn’t a weak link in that lineup defensively, and Middleton, Ariza, and Harkless can all guard 1-4. Portland would essentially have three defenders at SG, SF, and PF that could switch amongst each other and guard each position. This level of defensive versatility would match up beautifully against the Los Angeles Clippers, would limit mismatches in transition and in scramble situations, and would give the Blazers multiple bodies to throw against LeBron James.

The second reason I love this lineup is because the Blazers would have a top two bench in the league if Rodney Hood returns to form. Trent, Hood, Bjelica, and Collins would be the main guys highlighting the bench unit, and three of those four were 40% three-point shooters last season. Trent and Collins are good defensive players, and Hood and Bjelica would be fine defensively going up against bench lineups. Trent could pair with any two of Middleton, Ariza, and Harkless and Portland would still have three terrific perimeter defenders on the court at the same time.

The third I’ve already touched on a bit, but the shooting would be phenomenal. Portland would have four players who shot 40% from three in 2019-2020 (Middleton, Bjelica, Hood, and Trent), and would have a fifth in Ariza if you only counted his tenure in Portland. Collins and Harkless are good enough to knock-down shots when left wide open, and Nurkic has teased a three point shot that could be a real weapon of his going into next season.

This is the easiest, most realistic way I could say Portland contending next year. There aren’t any notable stars that’ll be available this off-season that would take the Blazers to contention status, assuming the Bucks don’t end up trading Giannis. Although it’s extremely unlikely that Neil Olshey could make all these moves happen, I’d be ecstatic with any of them separately. Speaking of Neil, it is time for him to figure something out to take this team to the next level, and I’m hopeful that this off-season will be his best as a Portland Trail Blazers GM. If not, then it might be time for the organization to move on, and I’ll count on Blazers Uprise fans to be my references for that application.

Will the Blazers “Run it Back” Next Season?

Will the Blazers “Run it Back” Next Season?