Paolo Banchero had 20 points and 10 rebounds in a loss to North Carolina. In a tight game however, he only managed to score only 1 point after a layup with 7:37 left. It was a great tournament run for Banchero, who made it further than any of his top-4 counterparts, but Duke’s season is over. In Duke’s five NCAA Tournament games, he averaged 18.8 points, 7.6 rebounds, and 3.4 assists. The only question about Banchero this summer will be if he goes 1, 2, 3, or 4 in the NBA Draft. He has an NBA ready game and will be a contributor right away at the next level.

Throughout the season, AJ Griffin has had an occasional bad game. Unfortunately for Duke, he had one of his worst games of the season in the Final Four. Shooting just 1 of 7, Griffin scored only 6 points. He missed all 4 of his three point attempts. Griffin’s injury history combined with the inconsistent production could make teams hesitant to draft him after the top-4 come off the board, but he’s still a sure bet to go in the top-10. Favorable measurements for his wingspan and standing reach could ease concerns. At the very least, Griffin should be a good three point shooter and above average defender in the NBA.

Two early fouls for Mark Williams sent him to the bench for about 15 minutes in the first half. Then with 10:31 left in the game, Williams committed his 4th foul and had to head to the bench again. He was only able to play 17 minutes total because of that foul trouble, ending the game with just 8 points and 4 rebounds. He did make 4 of his 5 shots, but his failure to stay in the game because of that foul trouble allowed North Carolina to control the boards. There were also two missed free throws from him with 46.7 seconds left in the game that Duke desperately needed. Williams has shown tremendous improvement from his freshman to sophomore season and should go somewhere in the first 20 picks of the draft.

Kansas jumped on Villanova early and were able to control pretty much the whole game, never letting Villanova get closer than 6 points. Ochai Agbaji was sensational. He scored 12 of the first 19 points for Kansas and finished with 21 points. He also hit his first 6 three pointers, going 6 of 7 from deep in the game. This is the type of performance Kansas has been waiting for from Agbaji. They’ll play North Carolina in the NCAA Championship and if Agbaji is on fire again they could be cutting down the nets. Agbaji will turn 22 in a couple weeks and that may make teams shy away from taking him as high as he should be taken, but he’ll be a great pick for whoever does take him.

Looking at Wendell Moore Jr’s numbers from Duke’s game against North Carolina would appear to be another good game from him with 10 points, 8 rebounds, 3 assists, 2 steals, and 0 turnovers. The problem was his struggles from the field, making only 4 of his 14 attempts. His only three pointer made was a huge shot that put Duke up by 1 with 1:18 left, but Duke was unable to do much after that. It’s a disappointing end to the season but it shouldn’t affect Moore’s draft stock.

With 10.4 seconds left in the game and his team down 3 versus North Carolina, Trevor Keels drove and got fouled. He made the layup but the referees determined the foul was before the shot so it didn’t count. Keels made the first free throw, but missed the second attempt. Overall, Duke made just 12 of 20 from the free throw line as Keels, Paolo Banchero, and Mark Williams each missed two. Other than missing 5 of 7 threes, Keels had a great game making 8 of 14 shots and scoring 19 points. He played strong defense as well. Keels won’t turn 19 until August which should help improve his stock with teams looking for younger players to develop. He also showed a willingness to take big shots for a Duke team that had a ton of talent.

It was an 0 for 3 first half for Christian Braun. His Kansas team got off to a great start but Braun didn’t have a lot to do with it. The second half was a different story however. Braun made 4 of 5 shots in that half to finish with 10 points. He also dished out 5 assists. Once again, Braun did all the little things that help a team win. If he continues to improve his playmaking and defense, while being a consistent three point shooter, he’ll tempt a team to take a chance on him in the late 1st round, especially if he plays well Monday night in the championship.

If North Carolina was going to knock out Duke, they needed a big game from Caleb Love and they got just that. The sophomore guard scored 28 points on 11 of 20 shooting. 22 of those points came in the second half. The performance is even more impressive considering he missed his first 5 shots from the field to start the game. Love hit what proved to be the dagger with a big time three pointer over the outstretched arm of Mark Williams with 28 seconds left in the game. He then made 3 of 4 free throws in the closing seconds to ice the game. Love had possibly fallen off of draft boards for a while but will find himself rising back up them with this tourney run.

After tearing his Achilles in the Elite 8, Justin Moore was forced to watch as his Villanova Wildcats were knocked out of the tourney by the Kansas Jayhawks. It will be a long recovery for Moore and whether it’s in the NBA or at Villanova, he’ll likely miss the 2022-23 season. 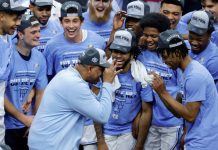