In my mind, the path the Portland Trail Blazers should take at the upcoming trade deadline is crystal clear. Damian Lillard and Anfernee Simons need to be the starting backcourt moving forward. CJ McCollum and Norman Powell are too good of players to not interfere with Simons reaching his full potential next to Lillard. To be a successful General Manager in today’s NBA, especially in a city like Portland, you have to be creative. This means acquiring as many assets as possible and using trade exceptions to get what players you ultimately want. Here’s an example of how to accomplish this:

If the Pelicans are as interested in McCollum as the rumors suggest, the Blazers have to jump on this unique opportunity. New Orleans has a large trade exception and are far enough under the tax line to use it without crossing that line. This is crucial in the plan for the Blazers, more on that later. The thinking for the Pelicans is that they’re looking to get better immediately to not only make a run at the playoffs this year, but to also try and convince Zion Williamson to want to stay long term. While I think the smarter thing would be to value their future assets more, they do have several extra future 1st round picks to use in trades like this. If they want McCollum that badly, the Blazers have to consider this.

The Celtics apparently offered the Timberwolves Josh Richardson and their choice of Aaron Nesmith or Romeo Langford for Malik Beasley. Boston is already regretting giving Richardson a contract extension after trading for him last off season. This also gets them out of the tax while adding a competent rotation player for the rest of the season that they’d have Full Bird Rights to possibly re-sign this summer.

For the Blazers, they couldn’t ask for more in terms of value. Josh Hart is a good defender who can handle the ball, rebound, and score off the dribble. He’d be a good fit as a 3rd guard with Lillard and Simons while also being capable of guarding some forwards as well. Satoransky is simply a contract filler with an expiring contract. Trey Murphy and Aaron Nesmith are both young players with multiple years remaining on their rookie contracts with 3 and D potential. Head Coach Chauncey Billups has already shown an affinity for developing younger players and it would be good to take some fliers on some young players for the rest of the season to see what he can do with them. Getting two future 1sts also helps as assets for other trades. As if this wasn’t good enough, the most valuable part of this trade is it would generate a $20.8 million trade exception for the Blazers to use over the next year, which will be explained why this is important later. This trade also puts the Blazers well below the tax line so they don’t have to worry about paying the tax or taking back salary in other trades.

Injuries to Collin Sexton and Ricky Rubio have left the Cavaliers in desperate need for another guard. With how open the Eastern Conference currently is, the Cavaliers have to be thinking “why not us” this year. Powell would be a good fit offensively next to All-Star Darius Garland. On defense, having Jarrett Allen and Evan Mobley protecting the rim would allow Powell to be more aggressive than he can be in Portland. Cleveland only sacrifices one draft to secure a player with four more years on his reasonable contract.

For Portland, this is all about cleaning up their cap situation and acquiring more picks. Rubio is on an expiring contract and while he could be a decent backup point guard if re-signed, would probably never play a game for the Blazers since he is out for the year. This also makes Simons the unquestionable lead guard for the remainder of the year and secures his spot next to Lillard next year after he is re-signed.

This trade can work with any number of playoff teams that could use a shooter off the bench like McLemore has been this year. The reason the Blazers would trade him instead of just keeping him is because they don’t have the rights to re-sign him without using an exception in the off season. So unless McLemore re-signed for the minimum again, he’d likely be gone in free agency. The Blazers might as well get value for him if they can.

The Thunder are asking for a 1st round pick for Kenrich Williams but they compromise with accepting a future 2nd because they dump Favors who still has another year on his contract for an expiring Satoransky. The Blazers might have to include another 2nd round pick here but that wouldn’t be a deal breaker.

While taking on salary for next year isn’t ideal with Favors, getting Kenrich Williams who is under contract next year for just $2 million would be a great move. He can shoot the 3, is a good defender, and can pass the ball a little. Getting another rotational piece locked in for cheap next year is a solid step towards building a formidable roster.

Watford has shown enough to earn a roster spot and locking him up on a multi-year contract for cheap right now would be wise. The Blazers never used their Mid-Level Exception this year and could use part of it to give Watford a little extra incentive to sign a 3-year deal. Something like $6 million over the next 3 years would be good for both sides. Promoting Watford to the 15-man roster also allows the Blazers to sign an additional two-way contract player from the G-League. Cameron McGriff who played in three games for the Blazers under a 10-day contract in December could be added for some wing depth for the rest of the season.

Here’s how the lineup shakes out for the rest of the season:

Here’s what the Blazers would have under contract for next year without making any moves (other than assuming re-signs):

Re-signing Nurkic is up for debate. If there is a good offer for him at the deadline the Blazers should probably take it, but I also think if Portland improved their forwards that Nurkic would be fine moving forward, so for this exercise I’ll just elect to keep him. They’d have their star backcourt. They’d have really good rotational pieces in Nurkic, Little, Hart, Nance, and Williams. They’d have young players with pop potential under the tutelage of Billups in Murphy, Nesmith, Brown, and Watford plus a plethora of draft picks.

Now, you might be thinking that these moves did nothing to help Lillard get anywhere near contention. Here are the tools to use to pave the way for that to happen:

Current 2022 NBA Draft picks after these trades: #9 (Blazers), #22 (Cleveland), #33 (Houston), and #39 (Blazers). The two picks from the Blazers would be likely to improve given the youth movement for the remainder of the season.

Are you disappointed that the Blazers wouldn’t have gotten players such as Jerami Grant, Domantas Sabonis, or Myles Turner? Well all three of those players make less than the trade exception the Blazers would have which means the Blazers could attempt to work out a trade for one of them without having to match salary back to whatever team has them. The asking price for Grant or Turner is said to be the equivalent of two 1st round picks and three for Sabonis. Well the Blazers would have up to four 1st round picks to offer, meaning they could likely get one of those three and still keep some of their assets. My favorite target using the trade exception would be OG Anunoby from the Toronto Raptors if they decide to move on from one of their three talented forwards. As one of the better perimeter defenders in the league, Anunoby would be an ideal fit at forward with a Lillard and Simons back court. A top-10 pick might be incentive enough for the Raptors to move on from him.

If the Blazers get lucky in the lottery, the top-3 picks all have game changing potential andl happen to be power forwards as well, which would be perfect for Portland. Jabari Smith, Paolo Banchero, or Chet Holmgren could all have intriguing skill sets that could significantly raise the chance at contention. Getting a high draft pick and keeping it would still allow the Blazers to use their trade exception with any number of the other three 2022 picks along with the two future firsts they got in these trades to add both a high draft talent and a quality player like the ones listed above.

If a star became available that makes more than the $20.8 million trade exception, such as Ben Simmons, Pascal Siakam, or Jaylen Brown, the Blazers could still make trades the old fashioned way by combining the salaries of Favors, Nance, Hart, or any number of the younger players to get enough outgoing salary to match that player’s incoming contract. Having several expiring deals, young players, and a multitude of 1sts gets you in the conversation for just about anyone that becomes available in the off season.

The Blazers could also elect to simply retool with the draft picks. While some will say it’s foolish to do that with Lillard’s age, there are numerous examples of players in recent drafts that helped teams almost immediately. Of course, this route would be risky but there is always a chance of hitting a home run. However, picking the right player is easier said than done and would require General Manager Joe Cronin (or whoever is in charge at that point) to nail the picks they make.

The whole point is that whatever route is chosen in the off season, the flexibility would be there to go in any number of directions. Whereas, keeping McCollum and Powell to trade this summer would require finding the exact teams that not only value them but also have what the Blazers would want back. It’s much easier to call a team and offer multiple picks and cap relief than it is to trade a big contract. What makes trying to trade those two in the off season even more difficult is that if the Blazers don’t make the playoffs, the conditions of the 1st round pick they’d still owe Chicago would make it so they couldn’t trade a 1st other than their own 2022 1st after the selection is made. They also wouldn’t have any of these extra assets to attach as incentive to get a better player back in those types of trades.

A good GM would be forward thinking like this given Portland’s current situation in a lost year with their best player likely done for the season. There shouldn’t be any excuses as to why trades are hard to make. It’s definitely a tough spot for Cronin to be in, but this is not the time to be passive or hesitant to make difficult moves. 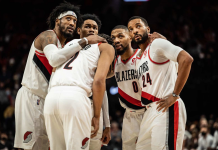 Come join us as our participants make their picks in our mock off season.

Blazers hire ESPN NBA Draft guru Mike Schmitz as Assistant General Manager. What do we think of the hire? Give us your thoughts as well!

Another NBA Mock Draft dropped earlier this morning! We will have another video later today so stay tuned!

A Crucial Week for Chauncey Billups