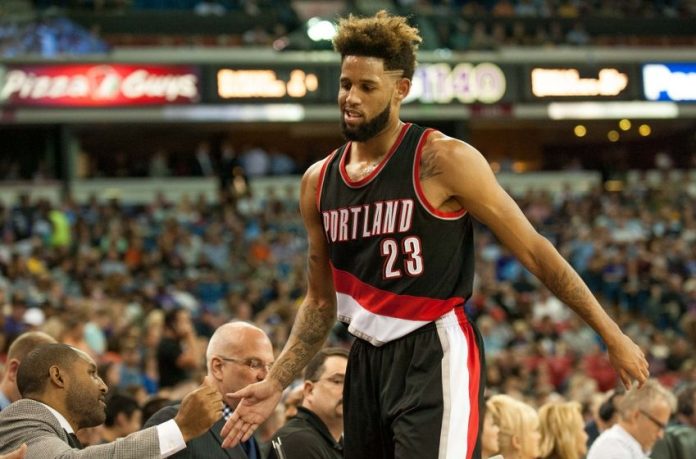 Thursday evening, the Brooklyn Nets signed restricted free agent Allen Crabbe to an offer sheet of 4 years, $75M with incentives that could bring the total amount of the contract to a staggering $83M.  The Blazers have 3 days to match this offer sheet in order to keep Crabbe, and it’s going to be a tough choice due to the amount of money offered by Sean Marks and the Nets.

I dove into the future and sorted out approximate salary totals based on whether the Blazers match Crabbe’s offer sheet or not.  Credit to Basketball Insiders and USA Today for Blazers payroll and salary cap information.

2016-2017:  The Blazers are likely done making roster moves for the summer. They have two restricted free agents left on the market other than Crabbe in Maurice Harkless and Meyers Leonard. It is very likely that the Blazers will bring both these guys back for next year, which would take them over the salary cap. Harkless will likely earn around $12M, and it’s rumored that Meyers will accept the qualifying offer and hit the market next summer. This is what I used when planning out Portland’s future.  Allen Crabbe is due approximately $18M for next year, which won’t hurt the Blazers one bit. They have no flexibility left because they will have no cap space left regardless of what they do with Crabbe, and keeping him won’t cause the Blazers to pay the luxury tax.

2017-2018:  This is where things get dicey, as C.J. McCollum is due for a contract extension.  It’s all but certain that he will receive a max contract which would start at $22M and increase from there. The Blazers will have 12 guys under contract, with Mason Plumlee and Meyers Leonard as the only free agents, assuming Leonard signs that one year deal this summer. If I had to put a market value on Plumlee and Leonard, it’d be $13M a year for each. It could easily be higher than that, as big men can end up extremely over-payed (see Mozgov, Timofey).  I still went with $13M. I also had Portland pick up Ezeli’s $7.3M option (they will unless Ezeli’s knees explode).

The only way that the Blazers would have any cap space next summer is if they let Crabbe, Leonard, and Plumlee go.  Even then, they’d only have $5M in cap space, or $12M if they let go of Ezeli.  That’s not enough cap space to justify letting numerous role players walk free.  In terms of cap space, Crabbe’s $18M doesn’t hurt the Blazers as is is likely they won’t have cap space regardless.  However, Paul Allen’s check book may take a beating.  The Blazers will have to let one of Plumlee, Leonard, or Crabbe go or it would result in a luxury tax payment of over $40M.  There’s no way Paul Allen will pay that much on top of a $142M payroll.  Therefore, if Crabbe is kept only one of the Leonard/Plumlee duo will be able to stay a Blazer.  Bringing one of them back still results in a $12M tax payment, which is more manageable.

The Blazers have 6 free agents this summer with Ezeli, Davis, Vonleh (RFA), Napier (RFA), Montero (RFA), and Connaughton (RFA) all being due for extensions.  Here are the raw salary totals without taking their cap holds into effect.

These numbers are hard to put into perspective because of the Blazers free agents.  To reach these totals they’d have to let go of all of them.  Essentially he only way they would have meaningful cap space two summers from now would be to let go of Crabbe, Plumlee, Leonard, and most of their 2018 free agents.  This would be a horrible management of assets, and I don’t see it happening.  It’s looking extremely they will have no cap space in the summer of 2018 either, even if they let go of Crabbe.

Therefore, the problem with the amounts of money being offered to Crabbe isn’t because it would kill cap space in future offseasons.  They wont, and McCollum’s inevitable max contract will make sure of that. Instead, the problem lies in regard to luxury tax.  Crabbe’s contract will send the Blazers salary up to or over that line.  While the team and future flexibility won’t hurt because Crabbe’s deal, Paul Allen’s checkbook will.  That leaves the Blazers with two options.  Either they renounce Crabbe so that Paul Allen doesn’t have to face luxury tax payments in the future, or they can keep a valuable, overpriced asset, and figure out how to manage their way around the tax in the future.

Blazers and Zach Collins Decide Against a Contract Extension

Gary Trent Jr Turns Down Extension Offer, Is This Bad?

Gary Trent Jr Turns Down Extension Offer, Is This Bad?

One Thing Each Blazers Player Should Work On This Off-Season