It has been no secret that much of the Blazers’ offensive firepower comes from their elite backcourt. For the past six regular seasons (2015-2021), Damian Lillard and CJ McCollum have averaged a combined 49 points per game.

Shouldering this kind of offensive load night in and night out isn’t easy, especially when you consider how Lillard and McCollum get their points. They usually work a two-man game with a big or fall back to pure one-on-one isolations, resulting in some pretty heavily contested shots.

Credit to them both, for making a good percentage of these shots, but I’m torn as a Blazers fan. Inspiring as it is to watch Lillard put the team on his back and hit insane step-back fadeaways from thirty-plus feet out, there just has to be a way to get him better shots.

The recent coaching changes give me hope. I believe there’s definitely some unrealized potential in this squad. In fact, I’m almost certain of this, and some advanced stats from the past 2020-21 season can back me up. Let’s take a look at those statistics. We will have a better idea of what the Blazers offense could potentially produce if Lillard and McCollum were able to get more spot-up opportunities.

How Do The Blazers Guards Get Their Points?

Looking at the stats table for Lillard and McCollum we can begin to discuss how the two guards mostly score their points and how efficient they are in different situations. We’ll do this with help from the official NBA Advanced Stats website, which categorizes each possession into one of eleven types. Two of the types, P&R Roll Man and Post Up, usually don’t apply to Lillard and McCollum. That leaves us with the following nine play types:

Here’s how the scoring breaks down for the two guards: 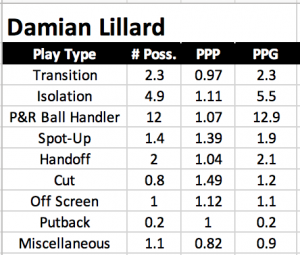 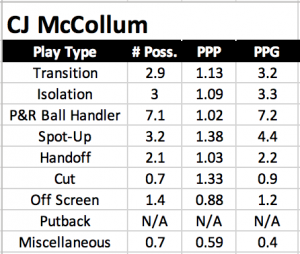 (Note that the PPGs don’t add up exactly to their total PPG. This is perhaps because the NBA site does not have data for them on the other two play types, since not enough possessions were recorded.)

Each table shows the average number of possessions, points per possession (PPP), and total points per game (PPG) per play type. Here are some key points:

How Do The Blazers Guards Stack Up On Each Play Type?

So far, we’ve seen a high number of P&R and handoff plays, resulting in a decent PPP of around 1.02 to 1.07. We see high efficiency on cuts with Lillard at 1.49 PPP and CJ at 1.33 PPP.  Spot-ups are great as well with 1.39 PPP and 1.38 PPP respectively . This hints that with better play designs, the Blazers could further improve their offense.

Where can the Blazers get the most out of their star guards? Is it with cuts and spot-ups or perhaps the P&R-heavy strategy really was the best way to go? One thing we can do is add a column to our graph showing the percentiles that shows how the guards stack up against all other players on these possession types: 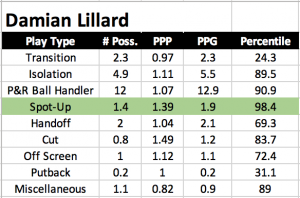 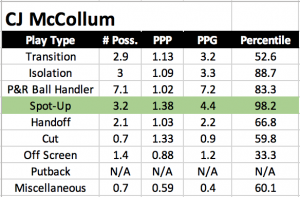 It appears we have our answer.

Damian Lillard ranks in the 98.4 percentile on spot-up shots.

CJ McCollum ranks in the 98.2 percentile on spot-up shots.

However, the two guards combined only get 4.6 of these spot-ups on average per game. McCollum gets more spot-up chances, most likely because he has tended to play off-ball more frequently when Lillard is in the game. Between them, only 4.6 spot-ups per game is not enough. Each of them rank in the 98th percentile, which is higher than some of the most prolific spot-up shooters in today’s league: Joe Ingles (97.6 percentile, 1.36 PPP), Joe Harris (96.2 percentile, 1.32 PPP), and even Steph Curry (93.7 percentile, 1.29 PPP), just to name a few.

This isn’t to say that cuts shouldn’t be a priority as well, they absolutely should be. Lillard’s off-ball cuts get him in positions where his FG% is 76.6%. It definitely helps that Jusuf Nurkic’s passing ability is elite among NBA bigs. However, our two guards are known for their shooting skills. These numbers prove that they are truly elite shooters, but haven’t been utilized to their highest potential.

There’s no denying that Lillard and McCollum are excellent isolation players. They have the percentile numbers to back that up. However, the spot-up numbers just jump out at me. With a few more cuts and especially spot-up plays, the Blazers guards could potentially improve their scoring output even more. According to these stats, if Lillard had one extra spot-up per game in 2020-21, he would average above 30 PPG for the season. The same thing for McCollum would mean almost 25 PPG for him.

The bottom line is, even with the duo posting the kinds of scoring numbers they have over the last few years, there’s still untapped potential. Hopefully, the new coaching staff recognizes this and tries to find more spot-up opportunities for the tandem this upcoming season.

A Crucial Week for Chauncey Billups