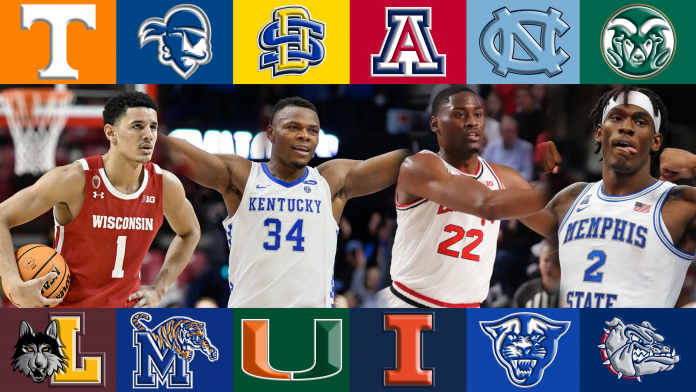 Conference Tournaments are underway! For bigger conferences, this is a great time to see some high-value matchups that’ll become the final determination for seed-lines. For smaller conferences, teams will be battling it out for a chance to dance in March! Each tournament winner automatically qualifies for the NCAA Tournament, and teams seeded 13-16 are squads that make the tournament with a conference championship and miss the tournament without one. That creates some top-notch drama in the final week before Selection Sunday!

What’s New: The 1-seed line is becoming clearer, as Gonzaga, Baylor, and Arizona are now considered “locks”. The fourth 1-seed will go to an SEC team: Auburn or Kentucky.

Rating Spreadsheet: This will be updated in the coming hours.

As we move into conference tournaments and March Madness, players have an opportunity to wow scouts by putting teams on their back and making a deep run into the tourney. Blazers Uprise will keep an eye on players that improve their draft stock over the next month of action. This is the last chance for prospects to put game film out there for NBA teams to look at.

Jalen Duren (C, Memphis)
Draft Range: Mid-Late Lottery
Prospect Notes: Memphis got a huge win for their NCAA Tournament hopes by beating Houston over the weekend, but Duren didn’t have the greatest game. He was in foul trouble and only played 22 minutes, scoring 8 points to go along with 8 rebounds, 3 assists, and 3 turnovers. If Memphis is able to go dancing, Duren will certainly be a player to watch. He won’t turn 19 until November so he still has a lot of growth potential as bigs typically take a year or more to develop.

Malaki Branham (SG, Ohio State)
Draft Range: Mid-Late 1st
Prospect Notes: While most of the national focus towards Ohio State has been on prolific scorer EJ Liddell, Branham has quietly been shooting up draft boards and mock drafts. Some places I’ve seen have the 6’5” guard sneaking into the late lottery. For the season, Branham is averaging 13.2 points on fantastic shooting splits of 49.1% (FG%), 43.6% (3PT%), and 81.8% (FT%). Over the last 7 games, he’s putting up 21.3 points per game. The freshman turns 19 in May and could solidify himself as a mid-first round pick if his scoring output continues into the tourney.

Johnny Davis (SG, Wisconsin)
Draft Range: 4-9
Prospect Notes: Wisconsin lost to Nebraska over the weekend, costing themselves the outright Big-10 regular season title, but the bigger news is the health of Davis after he was flagrantly fouled and left the game with a lower leg injury. All indications are that Davis will be fine for the Big-10 tournament, but Wisconsin is in a lot of trouble if he were to miss any action.

Oscar Tshiebwe (C, Kentucky)
Draft Range: Mid-Late 1st
Prospect Notes: Tshiebwe transferred to Kentucky after playing his first two seasons at West Virginia and has become one of the best big men in the NCAA this year. In a win over Florida on Saturday, Tshiebwe had a monster game with 27 points, 15 rebounds, 3 steals, and 2 blocks. For the season, he’s averaging 17.3 points and 15.3 rebounds per game. Tshiebwe doesn’t shoot 3’s but is a terror in the post and on the glass. He’s the type of player that can control a game with his physicalness and offensive rebounding. At 6’9” he might be a little bit of a tweener between PF and C so his wingspan and standing reach measurements will need to be impressive enough to lead scouts to believe he can play center in the NBA.