It’s time again for this week’s Roses and Rain! This is where I’ll write about three things going well for the Blazers (roses) and three things that aren’t going so well or need improvement (rain).

Rose #1: Splitting a Back-to-Back with Phoenix

The Blazers had to play in Phoenix on consecutive nights while their starting backcourt of Damian Lillard and Anfernee Simons watched in street clothes. In the first game, Jerami Grant showed he can step up without those two. He scored a game-high 30 points, including the game winning jumper as time expired. The NBA Officiating Last Two Minute Report did conclude that Grant got away with a travel on the shot, but it still counts nonetheless. The shorthanded Blazers had contributions up and down their roster with a balanced scoring attack and stout defense. The following night they got blown out of the gym, but winning one of the two games was an achievement considering the circumstances.

Winning games without Lillard in the lineup is already hard enough, but after scoring 31 points and dishing out 8 assists on Wednesday night, Simons was added to the injury report for last Friday’s game against the Suns with inflammation in his left foot. After missing two games, it appears he’ll miss another one on Monday as he is currently listed as doubtful. The Blazers can maybe get by without one of their two main playmakers, but certainly not both. Not much is being said about the extent of the injury, so all we can do is hope Simons is back on the court soon.

Rose #2: The Rest of the Team is Getting Healthy

Lillard has missed 4 games since suffering a calf strain. However, he has been upgraded to questionable for Monday night’s game against the Heat. Even if he doesn’t play, being questionable instead of listed as out should mean he’ll be back sometime this week. Gary Payton II has been out all year. The team recently announced that he could be back as early as November 15th. Trendon Watford missed the first 8 games of the season before finally playing last game. It was good to see him back on the floor. Hopefully, we’ll get to see the Blazers at full strength sometime soon.

Rain #2: The Remaining 4 Games of the Road Trip 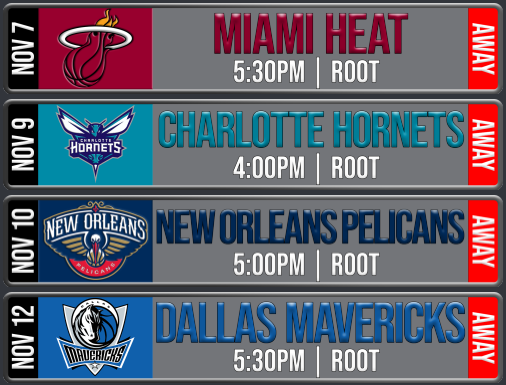 It was very nice to start the season off 6-3 for the Blazers. As I mentioned in the last Roses and Rain, the schedule is very difficult the rest of this month. The 4 games left on their current 6-game road trip include Miami, Charlotte, New Orleans, and Dallas. As long as they’re missing rotation players, getting wins on the road the rest of the month might be challenging. If they can manage to just win a game or two in these next four and then take care of business at home, they’ll still be in great shape moving forward. The Heat handed the Blazers their first loss of the season back on October 26th. Even though they have a record of 4-6, their physical defense and unselfish offensive approach is always a tough match-up for the Blazers. Charlotte has a 3-7 record so that’s a game the Blazers really need to get because both New Orleans and Dallas are good teams that Portland will be battling with in the standings all year.

This team just oozes positive vibes. The scene after Grant’s game-winning shot was so fun to see. All the players were crowded around him for the post game interview. Keeping the locker room in good spirits when all the injured players return will be important. Coach Chauncey Billups will have to either have to have a larger than normal rotation with several players playing less than they probably deserve or not play certain players some games when he has a full complement of players available. As long as the chemistry leads to playing together on the floor and a decent amount of wins, it’s usually manageable.

Rain #3: Offensive Rating Down to 19th

According to Basketball Reference, the Blazers are now 19th in Offensive Rating. Only scoring 82 points in a blowout loss combined with not having your two highest scorers will do that. It’s probably not something to worry about since Lillard and Simons being out obviously makes it tougher to score, but it’s something to keep an eye on. The main culprit for the offense being down for their standards is turnovers. While more ball movement can sometimes lead to more turnovers, the Blazers have been sloppy with the ball. Whether it’s been just losing control of the ball or traveling, there have been a lot of individual unforced turnovers. Those haven’t necessarily been because of the increase in passing. The other issue with their offense has been the low amount of three point shot attempts. At times over the last few years, they’ve been too reliant on three pointers falling, but this year has been extreme in the other direction. They’re tied for 4th in three point shooting percentage at 38.9%, which is great, but they’re 29th in attempts at only 29.1 per game. When the other team protects the paint by sagging off shooters and cutting off drives to the basket, they’ve got to find a way to make teams pay by finding a better balance between the outside shots and attacking inside.

Blazers lose again, this time in LA to the Lakers. They're now 11-11 on the season after starting 10-4. Come talk about the game with us.

Come chat about the game and hear us give live reactions to all the action during tonight's game!

Was Keeping CJ McCollum the Right Move for Now?