In a mere formality, the Portland Trail Blazers picked up the 4th and final year of Nassir Little’s rookie contract today, according to ESPN’s Adrian Wojnarowski.

Players drafted in the first round are slotted into contracts that are guaranteed for their first and second seasons and then have separate team options for the third and fourth seasons. The options have to be picked up a full season before they apply. So in the case of Little, this option applies to the 2022-23 season. Little will make $4,171,548 during that season.

Following the conclusion of the 2022-23 season, the Blazers will have the decision to offer Little a qualifying offer. Doing so would make him a restricted free agent and give the Blazers a chance to match any contract offers he gets from other teams. Not offering the qualifying offer would make Little an unrestricted free agent, meaning he could sign with any team that off season (like Zach Collins did with the Spurs this off season).

Playing sparingly over his first two seasons, Little has shown flashes of being a really good player but has yet to get a consistent opportunity to see what he can do. He’s played in 96 career games, averaging 12.6 minutes per game, 4.1 points per game, and 2.5 rebounds per game.

Heading into his third season, Little figures to finally be a part of the regular rotation under new Head Coach Chauncey Billups. Little has apparently been a standout through the first few days of training camp. Hopefully, that is a sign of an incoming breakout season for him. 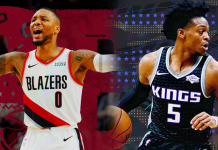 Could Damian Lillard and CJ McCollum be Utilized as Spot-Up Shooters?