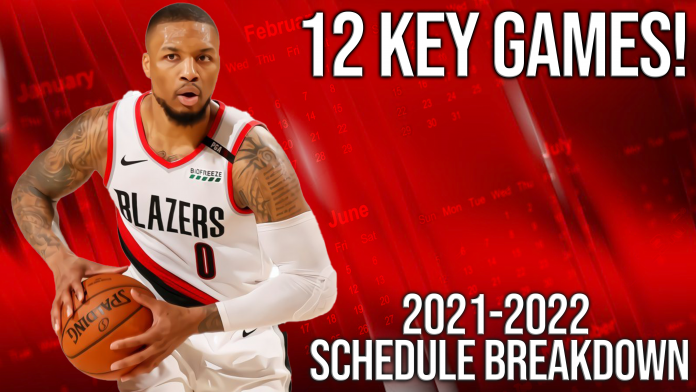 Yesterday, I dropped my schedule breakdown video for this upcoming Blazers season! In that video, I went over specific stretches of the schedule, highlighting strength of opponent and what a 50-win pace would look like if taking the schedule into account. Over the course of the season, I plan on combining articles with my videos to provide something additional to the topic at hand. In this article, I’ll be providing a look at some key games for the Portland Trail Blazers!

Blazers vs. Kings | October 20th, 2021 | 7:00 PM (All times PT)
The Blazers open up another season at home, which seems to be a frequent occurrence. After getting an NBA-record home opener winning streak broken last year in a 20 point loss to the Utah Jazz, the Blazers will have an easier opponent to hopefully start another home-opening streak. This game will have some extra intrigue in terms of how this team will play in their first meaningful game under new head coach Chauncey Billups, as well as how minutes are handled at the start of the season.

Blazers vs. Suns | October 23rd, 2021 | 7:00 PM
The Blazers get their first legitimate test of the season, facing off against the defending Western Conference Champion Phoenix Suns on Saturday night. Expect a playoff atmosphere inside Moda Center on the first weekend game of the season! After getting swept by the Suns in the regular season last year, this will be the first game where I think we’ll see a stark difference in coaching. The Blazers regularly switched or ran drop-scheme against Phoenix Suns pick-n-rolls last season, which the Suns absolutely destroyed en route to 132, 127, and 118-point offensive outings. I expect Billups’ to switch up the Blazers pick-n-roll coverage more frequently while trying things that former-coach Terry Stotts refused to. In a game featuring two teams that are relatively similar to last year, this will be a good game to see how much better the Blazers defense can perform with better defensive game-planning from the coaching staff.

Blazers @ 76ers | November 1st, 2021 | 4:00PM
This could be more of a key depending on how the rest of this off-season plays out. Will it be the first game for C.J. McCollum against his old team? Will Ben Simmons be heavily booed as a member of the Blazers? While I don’t think a Simmons for McCollum swap is likely, if it happens this game will feature a hostile atmosphere and might be the most intriguing game of the season. If not, it’ll still feature the Blazers going up against a top team in the East and will feature reactions along the lines of “See, that’s why we should’ve traded for him!” or “See, that’s why we shouldn’t have traded for him!” from a portion of the Blazers fan base.

Blazers vs. Lakers | November 6th, 2021 | 7:30 PM | NBATV
This game has all the ingredients for an instant classic.
– Carmelo’s Return
– Dame vs. Russ
– LeBron James
– Another chapter in the Blazers vs. Lakers rivalry
– Late Saturday-night game on national TV
Nothing more needs to be said here.

Blazers @ Nuggets | November 14th, 2021 | 5:00 PM
The Blazers will have the chance to exact some revenge against the team that knocked them out of the playoffs last year in their first matchup against the Denver Nuggets. It’ll be interesting to see how Billups’ game-plans for star big man Nikola Jokic in this game, and we’ll contrast how that game-plan differed from what Terry Stotts rolled out in the playoffs last season. These teams will feature very similar rosters to the two teams that faced off in the post-season, as Nuggets guard Jamal Murray will continue to be sidelined most if not all of the regular season as he recovers from an ACL tear.

Blazers vs. Raptors | November 15th, 2021 | 7:00 PM
Another key game early in the season, this matchup will feature the return of former-Blazer Gary Trent Jr. in his only game in Portland this season. Expect a raucous ovation for the fan-favorite. This is a game the Blazers should be able to take care of as the Raptors will be without their best player (and our favorite off-season trade target) Pascal Siakam.

Blazers vs. Nets | December 23rd, 2021 | 7:00 PM
The Nets travel into Portland for the only time this season (until the NBA Finals). Blazers fans will have the chance to see Kevin Durant, James Harden, and Kyrie Irving assuming they’re all healthy and want to play. This will be a great litmus test for the Blazers against what could be the top team in the NBA next season. It’ll also be the final game before three days off over Christmas in what will be a little break for the Blazers. It would be a major confidence booster for the team to be able to go into that break comfortably with what could be their best win of the season.

Blazers vs. Bucks | February 5th, 2022 | 7:00 PM
The first matchup against the defending champions will be a good litmus test against a team that had Portland’s number last year (Milwaukee won both matchups by scores of 134-106 and 127-109). This will be Blazers’ fans only chance to see star Giannis Antetokounmpo in Portland this season, and it’ll give the organization a good feel for whether or not the team is at contention level in the leadup until the trade deadline (which doesn’t have a set date yet). This game should also feature Rodney Hood in his first game back in Portland after he signed with the Bucks this off-season.

Blazers vs. Warriors | February 24th, 2022 | 7:00 PM | TNT
The first game after the all-star break will feature a home matchup against the Golden State Warriors that will be televised nationally on TNT. This will be the Blazers third and final matchup against the Warriors, so it could carry heavy playoff implications as a game that decides who would be higher-seeded team in case of a tie as the end of the season. This could also be one of the first home games in which Blazers fans can watch any new faces they pickup at the trade deadline, which is usually before the all-star break.

Blazers vs. Spurs | March 23rd, 2022 | 7:00 PM
This should be Blazers’ fans first chance to see former Blazer lottery pick Zach Collins square off against his former team. The Spurs look like bottom-feeders this year, but this will be the Blazers first game back after a five-game road trip, which could make this a potential trap game. This will be the first game of a five-game home stand against five teams that are projected to end up in the lottery this season. If the Blazers take care of business, this could be the start of a big winning streak and some major momentum to finish the season.

Blazers @ Mavericks | April 8th, 2022 | 5:00 PM
The second-to-last game of the season could carry huge playoff implications as the Blazers go on the road to face the Mavericks for the third and final time. As is the case with any third game against a conference foe, this game could carry the weight of two teams trying to better each others’ records, but it could also be the game that determines who wins the tiebreaker. It’ll be extremely interesting to see the playoff matchup scenarios going into this matchup and how they could be determined by a Blazer win or loss.

Blazers vs. Jazz | April 10th, 2022 | Time TBD
A key game for obvious reasons, the Blazers finish the season at home with a matchup against the Western Conference’s 1-seed from last year in the Utah Jazz. This could be a game featuring two teams battling each other for playoff positioning, or at least a game in which the final result will determine potential first round matchups. Hopefully this isn’t a game the Blazers need to win in order to avoid dropping into the play-in tournament, which will return again this season.

One Improvement Each Blazers Starter Needs to Make for the 2021-22...